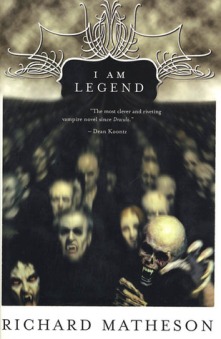 “The world’s gone mad, he thought. The dead walk about and I think nothing of it.
The return of corpses has become trivial in import. How quickly one accepts the incredible if only one sees it.”

A deadly pandemic has laid civilisation low. Robert Neville is the last man left alive on earth, but he is not alone. By day, he does what he can to survive in Los Angeles and hunts the monsters roaming the world. By night, he barricades himself inside and prepares to fend off the creatures that were once his neighbours, holding them at bay by garlic and holy symbols while he works on a cure the disease that took his family from him.

I Am Legend is a vampire novel that isn’t really about vampires. Instead, it’s about survival in a world gone mad. The monsters themselves are almost laughably pathetic and easily vanquished in daylight, and their vulnerabilities limit what harm they can bring to Robert beyond mild taunting. It’s implied that Robert could hold the creatures off indefinitely, but the real danger is what is going on in his mind. Robert is unravelling, slowly, clinging desperately to any fragment of hope. He researches a possible cure for vampirism because it gives him something to do. He obsesses over befriending a dog, the first living creature he has seen in years. He is so ecstatic to meet another living human being that he doesn’t stop to think that it’s just a little bit strange. By the novel’s climax, it becomes clear that it’s Robert who is the tormented monster that can’t function in this brave new world, not the vampires who have begun to rebuild society.

Six decades after it’s initial publication, I Am Legend still reads like a fresh take on vampires. It deconstructs a lot of vampiric folklore, tries to explain it rationally instead of giving it a supernatural impetus. By rooting the cause of the vampirism biological warfare and mutation, Matheson presents vampirism as a disease rooted in science instead of a mystical curse. Most of the folklore concerning vampires— in particular, their vulnerability to garlic or mirrors— is explained as a psychosomatic product of cultural osmosis.

I Am Legend turns post-apocalyptic horror by asking who’s the real monster: the people who’ve adapted to change or the crazy survivalist trying to recreate the old world? It did a lot to reclaim vampires from the crypts of gothic churches and directly inspired the zombie apocalypse genre by presenting the undead as a mass wave of infected corpses in the wake of society’s collapse. It’s an impeccably written and vital book for anyone who wants to understand the psychology of horror, and how to subvert genre conventions.