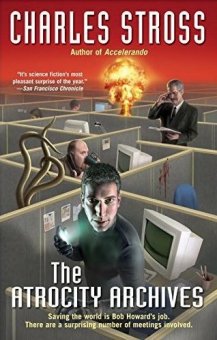 “Because, you see, everything you know about the way this universe works is correct—except for the little problem that this isn’t the only universe we have to worry about. Information can leak between one universe and another. And in a vanishingly small number of the other universes there are things that listen, and talk back—see Al-Hazred, Nietzsche, Lovecraft, Poe, et cetera. The many-angled ones, as they say, live at the bottom of the Mandelbrot set, except when a suitable incantation in the platonic realm of mathematics—computerised or otherwise—draws them forth. (And you thought running that fractal screen-saver was good for your computer?)”

The Atrocity Archives is the first book in the Laundry Files series by Charles Stross. It’s narrated by Bob Howard, a standard computer nerd who currently works for the British civil service, in a secret department known as the Laundry, whose remit is to protect Queen and Country from the threat of extra-dimensional threats to reality. They mostly deal with the unspeakable, gibbering horrors they face with an excessive amount of paperwork.

In the universe of the Laundry Files, magic is real, and it’s more trouble than it’s worth. Magic is in effect a highly advanced form of mathematics, algorithms that create portals to other realities and allow the Things within to slide through. The problem is that humanity is doing an awful lot of these magical calculations with the help of their computers, and as the population grows and the number of minds performing “magic” increases, the world edges closer and closer to the apocalyptic cataclysm known to the Laundry as CASE NIGHTMARE GREEN

I’m still not sure what genre to classify the Laundry Files as. Is it a comedy? Cosmic horror? Stale beer spy fiction? It’s all these things, and a lot more. Stross has Terry Pratchett’s gift of using comedy to make serious points: Bob makes wisecracks that will feel familiar to dorks the world over who feel frustrated with excessive bureaucracy. But it’s clear that there is a layer of horror beneath the laughs, as in the case of an ordinary couple who choose not to have children because when (not if) the stars are right and the Old Ones rise, they don’t want their offspring to suffer through it. It’s a smart, hilarious take on office culture, an exciting spy thriller and a genius deconstruction of Lovecraft’s worldview that I cannot recommend enough.