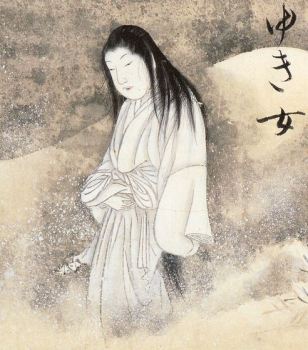 “He was awakened by a showering of snow in his face. The door of the hut had been forced open; and, by the snow-light (yuki-akari), he saw a woman in the room,— a woman all in white.”

Horror is universal, but ghost stories don’t always have the same cultural context. In Britain, ghost stories are usually reserved for the winter months: for Halloween, as summer dies and gives way to winter; or at Christmas, when the night is darkest, and the whole world seems filled with a neverending chill. But in Japan, ghost stories are associated with summer: they are told at twilight on warm nights, to cool the blood. According to Shinto belief, humanity shares the world with a myriad of gods, spirits and mysterious creatures: and if we wander too far, or speak to the wrong person at sunset, we may not come back the same.

Lafcadio Hearn was one of the first writers to bring Japanese folklore to a broader Western audience. Hearn’s life is fascinating in itself: a Graeco-Irish journalist who immigrated to New Orleans (he wrote an obituary for Marie Laveau) and later settled in Japan and wrote many books about his adopted homeland. His work has been adapted several times for TV, film and anime, and Kwaidan: Stories and Studies of Strange Things is perhaps his most enduring work.

Ostensibly, Kwaidan is a collection of ghost stories and folk tales that Hearn collected, translated or heard from others, though it’s possible that he created or at least embellished some of the stories himself. The tales serve as bite-sized tastes of Japan’s folkloric fringe: they include yuki-onna, the snow woman, who preys on travellers lost in a blizzard. Then there’s Hoichi the Earless, the minstrel doomed to play for a band of ghostly samurai. And it includes the tale of Akinosuke, who dreams a whole new life for himself, only to see it disappear when he awakens. There’s also an entire appendix devoted to Hearn’s fascination with entomology if you want to read about why ants are better than people.

Kwaidan is a strange book, written by a strange man, about strange things. It’s written in the direct, matter-of-fact tones of fairy tales the world over, with little of the concern for characterisation or mood one might see in “real” horror, but the simplicity of Hearn’s prose allows the reader to put together the pieces for themselves as they imagine the strange creatures within. The stories work best when they are read allowed as they were intended: as the sun goes down and the light begins to change, and you long for a chill to run down your spine…